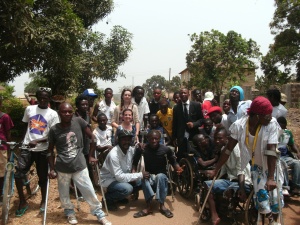 When UNISER staff asked me to write an article about my experience in Sierra Leone, I was very happy to let the people know about this amazing country. Just right now I am realizing how hard it is to write shortly about six months in Africa.

Ok, we can start with the introduction of myself and how I met UNISER. I think it will give you a blink on how this experience was so special since the beginning.

It was February 2012 and I was looking for a job, again. I was just come back from New York where I was for an internship in the United Nations headquarter. An amazing adventure but I felt like I missed something. I missed the real part of all the talks I heard in the UN, I felt like I could do my part by going in that areas where people need helps. I was looking for something different.

A year before, I participated to a selection for an EVS in an association in Padova. I was not selected that time but they used to send me any calls for other EVS project. I was looking for something international so I was not always responding to that mails except when I received a proposal for an EVS in Sierra Leone. It was mid February and the EVS project started at the beginning of March. “It will be impossible”, I said to myself, looking at the short time I had to fill up all the bureaucracy-administrative-practical things. In less than three days, the Paduan association put me in contact with the sending organization (UNISER) and the Coordinator of the project, an association in Hungary (ARTEMISSZIO’). They gave me all the details about the project. It concerned basically on monitoring human right violations, regarding especially women, children and disabled. Together with the host organization, I should put in place some activities in order to prevent violations against these categories and document them. Time frame: March-August 2012. It seemed the project fitted perfectly with my expectations and my profile. Or likewise!!! Because of my background in international laws, I was the person they were looking for so I had to decide if I wanted to go…in four days. I think that was the key. If I had more time, I would have had surely more doubts. Never heard about Sierra Leone except for the civil war ended in 2002

(not a good knowledge in this case!), never known the situation now in that Country.

I decided to go and in 20 days I had to organize my luggage, doing my vaccinations and collect all the information about Sierra Leone. Shortly, planning my trip. I was happy, worried, excited, anxious, curious, afraid…. I put all my feelings and emotions in my bags and the 13th March 2012 I took my flight, destination: FREETOWN, Sierra Leone.

The first impact with the Country, the people and the environment in general was breathtaking. I was living a whirlwind of emotions. The people were happy and anxious to know us (I was with other two volunteers from France and Hungary) and we were just adapting to the climate, the new reality, way of living and facing the first difficulties. We were also planning our activities without really knowing how to deal with their problems. Most of all, I was facing that reality with my “western way”, thinking it was the best…..It took me some time to understand that Sierra Leone has its own way to deal with certain situations which happen on a daily basis.

What really make me understand that I was in a totally different reality? Well, my second day I was dancing with a groups of deaf and dumb and talking with my new friends, smiling and asking a lot of questions. Hungry to know more! Somebody of the organization called me inside the office, they needed some help…somehow…

In the office there were a young girl, her mother and three young guys. They were discussing about a solution in a case of rape. It took me a while to understand that in the room there were the victim, facing her perpetrators.

This is the way, people of Sierra Leone try to deal with these kind of crimes which happen everyday.

This is the way, people of Sierra Leone face the problems they have since the end of the civil war.

This is the way, people of Sierra Leone want to move forward to find a better way of living.

Nothing was as I was expected.

Nothing was even close to my way of dealing with the problems.

Nothing was as they said it would be.

Nevertheless, when people now ask me “Would you like to come back?”, my answer is always the same:

“I’d rather prefer to go ten times in Sierra Leone instead of New York. Sierra Leone is refreshing and it gave me the opportunity to look at their problems in an unusual way and find a good and appropriate solution to them. My small help was just a drop in the ocean and most of the time related more to being “white” instead of having the appropriate skills and knowledge. But in Sierra Leone I felt useful. I felt like my help could make a change. I felt like people appreciate any kind of help you are able to address them.

These are feelings I can never experience in my Country or in any other developed Country. All of this, filled me up more than any other trip I did and I am looking forward to go back again!